Monday brought the news of the latest large law firm merger. The WSJ Law Blog first reported that Thelen Reid and Brown Raysman will merge next in December.

“This combination gives us the presence we have wanted on the West Coast and in Asia for our technology, media, and IP practices, and the platform we need to service and grow our real estate finance practice.”

I thought the word “platform” sounded vaguely familiar. I searched the Wired GC archives and found that word came up earlier when Shaw Pittman and Pillsbury Winthrop merged last year.

Any talk of client value?

BusinessWeek profiles the moves of DuPont to take more legal work offshore, in this case with OfficeTiger. Here’s some interesting quotes by the numbers:

— “If DuPont does well with this, you will find other companies taking a good look,” says Bradford W. Hildebrandt, chairman of the legal consulting firm Hildebrandt International Inc., which estimates U.S. firms can save 25% to 35% by farming legal work to Asia.

— “For OfficeTiger, success could mean a surge in business. By the end of 2007, [they predict the] Asian legal team could reach 1,000 with several hundred lawyers.

The entire article is worth a read. Some have been thinking this offshore trend was always years away. Certain (most?) law firms might prefer to ignore the news; forward-thinking firms would be wise to consider how they can be involved in developing higher value solutions for their clients.

If they don’t, someone else will…

Once companies get comfortable with document and discovery related services, you can bet they will start moving up the offshore chain.

A tip of the Wired GC cap to DuPont for making a move that many Fortune 500 GCs are probably thinking about, but up until now have settled for “… you go first.”

Here’s a summary for the visual types among us:

Here it is if you missed it. The WSJ Law Blog also weighed in.

First off, you have to love the picture, with two compliant Weil Gotshal newbies dutifully holding a BlackBerry for the photographer. The dapper WG associate with the belt holster ought to know better than to stand in front of the “Weil,” though.

But then there’s the punchline: the new starting rate in NYC is clearing out at $145,000.

That may not be a lot of money in the Big Apple. It does, however, get the attention among some of the faithful clients of Weil Gotshal. They see this for what it is: their law firm is paying lawyers with no experience more than it pays anyone save top-level managers. You’d think that this would have repercussions long-term for such firms. Apparently you’d be wrong.

But the money is not the worst part.

The worst part is that some firms float this trial balloon:

The inevitable issue for clients as well as the firms is whether higher salaries are reflected in increased hourly rates. But Michael J. Gillespie, a partner at Debevoise & Plimpton, another law firm based in New York, said: â€œThereâ€™s not really a connection between salary levels and hourly rates. We set salaries at whatever is necessary to attract and retain the best associates. We set hourly rates by client demand and market conditions based on firms operating at our level in the market.â€

No connection between associate salaries and hourly rates?

That means partners are taking less to give first year associates more? And more to the rest of the associate classes to avoid overly compressing them?

Perhaps partners should try these on when standing next to clients:

… or the yin and yang of the legal job market.

On the positive side, Robert Half Legal (what’s the other half?) reports that attorney hiring is on the upswing. Particular strength is seen in the areas of corporate governance/ethics and litigation. These may be two sides of the same coin: you hire litigators when governance and ethics go off the rails.

On the firing side, law.com covers the news that McAfee Associates allegedly terminated its GC over actions related to stock options. My favorite legal website also offers an update regarding concerns related the departure of BearingPoint’s GC earlier this year.

It’s never easy to find a good legal job, and certainly harder to do so when you are no longer comfortably ensconced… 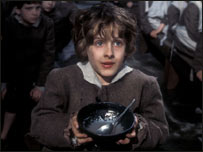 So law firms (in NJ at least) are given the ethical go-ahead to own other law firms as subsidiaries, according to this article in the New Jersey Law Journal.

Fellow Legal Blog Network member Larry Bodine is quoted as calling this development a “potential gold mine” for law firms, allowing them to grab firms in hot practice areas and casting them off when the worm turns. More from Mr. Bodine, including the text of the opinion, here.

But for the average law firm of some scale I really wonder if this isn’t precisely the wrong thing at the wrong time.

Doesn’t buying another firm only give you three things? A claim upon receivables, a hope that the good lawyers stay and a prayer that clients remain as well?

As a GC, I would have to think about this, and wouldn’t necessarily see this as a negative for a law firm that’s owned by another firm. But it sort of seems at first blush that such a firm is saying between the lines that it couldn’t cut it on its own.

It that good positioning in the marketplace?

If the management of some major firms are spending time looking at other firms or ancillary businesses, what does that say about their confidence in the existing business model?

Could this NJ ethics development, coupled with one of the results from the Clementi Commission in England (non-lawyer ownership of law firms; more from Bruce MacEwen here), spell the start of law firm roll-ups and eventual IPOs?

Boy, would I love to read a Form S-1 from a major law firm.

But if Wachtell Lipton ever goes public, sign me up. Something tells me that they are too busy focusing on their core transactional business that throws off over $2.3 million per year in revenue per lawyer.

An ethics opinion a gold mine? Or an open mine shaft? Time will tell.