When reporters become the story, you have something worth reading about.

One of the first Bloomberg customers to complain was Goldman Sachs; one assumes that this would get some attention from management at Bloomberg given their corporate use of the terminal.

Apparently a Bloomberg reporter contacted Goldman about the employment status of an employee, because the reporter noted that this employee hadn’t logged on to their terminal for some time.

Mistake? At least one important customer apparently saw it as something more.

Then early this morning, the editor-in-chief of Bloomberg News, Matthew Winkler, published a slightly longer explanation, which included this:

The recent complaints go to practices that are almost as old as Bloomberg News. Since the 1990s, some reporters have used the terminal to obtain, as the Washington Post reported, “mundane” facts such as log-on information. There was good reason for this, as our reporters used to go to clients in the early days of the company and ask them what topics they wanted to see covered.

Mundane? What was possibly mundane in the 1990s is apparently different now.

Bloomberg News is really an awesome operation. Their iPhone app, with its integrated video and audio content, is way beyond what others offer right now in terms of global coverage and quality.

In-house counsel can watch this story to see what Bloomberg’s crisis management playbook says, and watch in play out in real time.

There may be more twists and turns to this story. One question some law firms and corporate legal departments may have is this: Did reporter access to selected customer use information extend to the Bloomberg Law product?

We are in the early stages of the digital era as far as privacy and appropriate data use are concerned. This is a really hard issue for lawyers since it has a technological nexus and is difficult to research and understand, let alone monitor in real time.

A common tactic in compliance training is to suggest front-line personnel imagine “reading about the company doing X on the front page of the New York Times” before doing it.

I guess that is no longer a hypothetical scenario for Bloomberg.

Sometimes a public-sector scandal can illuminate something that has been going on in the private sector for some time.

Last Friday, when the news of the resignation of CIA director David Petraeus broke, Lockheed announced the forced resignation of its incoming CEO. A recent tip had alerted the company to an alleged relationship between president Christopher Kubasik and a subordinate. That would be in contravention of Lockheed’s ethics code.

Lockheed commenced an internal investigation that was swift (two weeks) and decisive (he has to go). By all appearances, Lockheed handled a difficult situation as well as you can. Textbook, really.

In the aftermath, however, there have been a few comments on these executive/subordinate relationships that I find puzzling. Two were contained in an article yesterday reported by Bloomberg.

“The executive’s whole life gets consumed by the company and there’s less social interaction outside of the office, so there is more temptation to create a relationship in the work arena…”

This sounded to me more like a commentary on the era depicted in “Mad Men” than the morays of 2012. Not that it matters as to the violation in the Lockheed case, but Mr. Kubasik is married. Given the pay and perks public companies bestow on their CEOs, I have to think that those who are unattached can find other ways to date.

An even more confusing comment was attributed to Donald Schiller, of Schiller DuCanto & Fleck. Mr. Schiller had represented the wife of former Boeing Co. CEO Harry Stonecipher, who departed Boing in 2005 under circumstances that are somewhat similar to the recent events at Lockheed.

In explaining the current spate of CEO departures under an office romance cloud, Mr. Schiller goes in a new direction:

“Great athletes often are tempted by groupies, and CEOs of publicly traded companies now have their groupies, too,” Schiller said.

The difference is that athletes and musicians aren’t bound by corporate governance policies, he said. When the relationship involves a co-worker, it tends to be a long-term affair that can damage a company, he said.

“The couple starts working late and pretty soon it leads to better assignments and a file clerk becomes a corporate vice president,” Schiller said. “It’s bad for morale when that’s happening, and it’s bad for the performance of the CEO, and eventually it becomes a matter for the board.”

CEO “groupies?” I have a hard time picturing this; it also sounds rather close to blaming the subordinate. Mr. Schiller is on the mark when he speaks of morale. CEO-subordinate relationships that I have heard about first-hand were almost always the worst kept secret at the company involved.

It is said that every FAA regulation is the result of a crash. Ethics rules are similar; those prohibiting romantic relationships with subordinates are borne of experience, that often resulted in messy litigation. Even when it doesn’t, the subordinate often departs abruptly, sometimes without another job lined up. Virtually never with a severance payment.

The only way compliance works is when senior executives take ownership. And a key tool in geting employees to take ethics codes seriously is when they see that they are enforced consistently. As harsh as it may seem, Lockheed went through one major “teachable moment” when Mr. Kubasik departed under unfortunate circumstances.

And Lockheed has already named a new CEO to take over in the new year; it’s current COO Marillyn Hewson. That’s good news on many levels.

Last time, a contrast between two leaders at the point of decision: one at Olympus, another at Penn State.

Today, another example, again one from Japan. It involves the earthquake offshore of Japan in March. The resulting tsunami hit a Tokyo Electric nuclear facility, disabling reactors and ultimately resulting in releases of radioactivity. As the waters receded, the failing cooling systems at the Fukushima complex lead to releases of radiation, and an ever-widening evacuation of citizens who lived nearby.

Additional details of the evacuation began to emerge in August, and I threw an article from the New York Times into a file.

Apparently some of the evacuees were not moved away from the radiation, they were moved into it. Into an area where government computer models predicted fallout. Children would play outside and water from the area was used in food preparation.

But the forecasts were left unpublicized by bureaucrats in Tokyo, operating in a culture that sought to avoid responsibility and, above all, criticism. Japanâ€™s political leaders at first did not know about the system and later played down the data, apparently fearful of having to significantly enlarge the evacuation zone â€” and acknowledge the accidentâ€™s severity.

I actually had to read that a few times to let it sink in. How could you highlight a compliance “in a culture that sought to avoid responsibility and, above all, criticism?”

The clear answer, of course, is you can’t.

An effective and robust compliance program is easy to document and hard to deliver. If employees don’t see leaders acting consistent with compliance, they step back. If they have learned to go along to get along, then you might as well have no compliance program at all.

Last week, one Japanese government official tried to demonstrate that decontamination efforts were making water again safe to drink. Note that his hand shakes slightly at the :30 second mark:

I guess that’s a start in changing the culture, emphasizing responsibility, and facing criticism squarely.

About a week ago, I started working on a post about former Olympus CEO Michael Woodford, who was fired after raising concerns about the company’s excessive payments related to acquisitions.

It is rare that a CEO goes public about such things, rarer still that a company fires the CEO without investigating the matter completely.

Yesterday we learned why these payments were made: to hide unrecognized losses that go back decades. The company admitted this yesterday. Mr. Woodford has continued his quest for the truth since his firing, including this YouTube interview with Reuters today. The old-line members of the Olympus board thought that by firing Mr. Woodford, he would go away quietly. Apparently they are not versed in the ways of modern news gathering and social media. Likely, they will all be gone soon.

The point I was going to make is when a company would fire a CEO for bringing allegations forward, how can a company expect the rank-and-file employee to take compliance seriously?

Unfortunately, another chance for the CEO as whistleblower has emerged in the last few days. It involves Penn State University and its legendary head football coach, Joe Paterno. I think anyone knows the basic facts at this point: over 10 years ago Mr. Paterno was made aware of allegations of sexual abuse against a former long-time assistant coach at Penn State, Jerry Sandusky. Mr. Paterno informed his supervisor, the Penn State athletic director. Mr. Paterno seemingly did not go to the authorities, and Mr. Sandusky had continued access to Penn State athletic facilities. There remained connections with Penn State and a group aligned with Mr. Sandusky that was supposed to support at-risk young boys.

The story is that a graduate assistant saw Mr. Sandusky and an underage boy in the shower. The GA told Mr. Paterno, which itself was an act of courage at Penn State. When nothing happened, you have to wonder how the GA felt about the adequacy of university compliance programs. Or whether Pennsylvania law applied inside the confines of Penn State. Sadly, State College, PA is also referred to as “Happy Valley.”

Make no mistake about it, Mr. Paterno was the CEO at Penn State. Over the years, he was encouraged to run for public office; these sordid allegations emerged a week after he set an NCAA record for wins at a major football program.

Mr. Paterno will resign soon, and his departure will likely be called “retirement.” The athletic director is on leave, and the university president is hanging by a thread.

If leaders don’t act in congruence with compliance, we can’t expect employees to take any of the platitudes about integrity seriously. 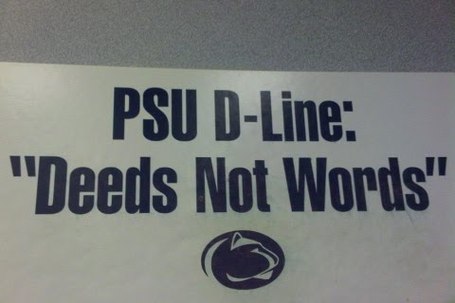 You can’t turn on the news without seeing a large Japan-based auto company being pilloried by Congress. (This is the same company that was lionized by certain senators last year). Once a company’s executives are called to Congress, and made to stand with their right hands raised, the court of public opinion already has rendered a verdict.

What is different is that this company has a product development process named after it. Two of the bedrock principles behind this system are “Respect for People” and “Teamwork.”

These are more than bromides, since process is nothing but words on paper; until somebody does something, nothing happens.

In law school you learn how to assemble the facts, marshal applicable law and advocate an outcome. But you likely didn’t learn how to be part of senior-level corporate decision-making so you have a chance at influencing people and shaping outcomes.

Part of the job description for an in-house counsel is to pull back from the demands of all sorts of processes on a good day and spend even 10 minutes considering how the bigger picture is trending for your client. This task is about 100 times harder when you are facing a major crisis or regulatory challenge.

And it is paradoxically even more difficult when you are the GC of a very successful company, because some of your colleagues may believe that all those great processes will themselves ensure good outcomes.