The Wired GC has received a bootleg copy of a beta version of a new iPhone app that could shake the corporate legal market to its core.

The working name is “clickESQ.” We are not sure at this writing whether this will be the final go-to-market name or not. We were able to snap a quick picture of the home screen of the app before our trial timed out:

The New York Times recently wrote about how click-feedback technology is taking various vertical markets by storm. As the Grey Lady’s scribe explains:

But clickers can now be found in some surprising corners of American life, too, as churches, fire departments, cruise ships and health care providers discover uses for them, essentially spreading the phenomenon of online crowdsourcing to off-line crowds. Fans of the devices say they are efficient, eco-friendly and techno-tickling, allowing audiences to mimic TV game-show contestants.

While giving an opinion by actually raising oneâ€™s hand may never become completely extinct, the devices can give voice to people too shy to speak up.

Here is a picture from that article of this technology being used in the ecumenical space: 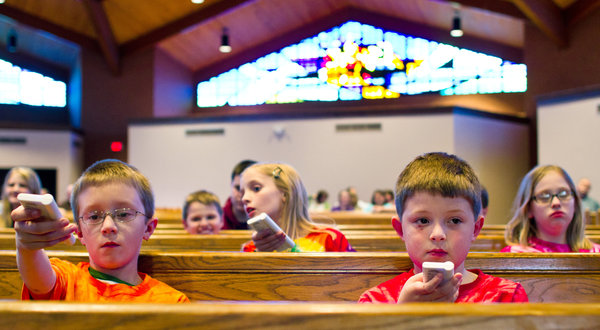 We originally thought that this was a group of summer associates rating partners of a certain AmLaw 200 law firm.

The clickESQ app comes with a companion website that the users log into and then display on their desktops or project onto a conference room screen. This latter method has proved particularly enjoyable for users, especially when alcohol is served during the feedback-fest.

Here are some potential uses for clickESQ that marketing consultants have been brainstorming about:

2. Give feedback on major firms in end-of-month budget meetings.

3. Play match-the-slogan with key law firms. (Great to get a sense of the ROI of marketing spend).

4. See if you can pair effective billing rates with firms. (Everyone wants to be a go-to firm, you know).

5. Rate new associates when they pop up unannounced on invoices. (Be nice, he’s a legacy).

The clickESQ developers hope for a tie-in with Verizon to push corporate legal department adoption of iPhones. They may bundle the app with a purpose-built productivity suite, which will include a version of Tetris that allows in-house counsel to watch how their budgets are being busted in real time as the billable hours keep coming at them like rain:

On the developmental timeline is a way to crowd-source ratings across all corporate legal departments that opt-in to this “platinum” feature. One of the architects of the clickESQ source code tells the Wired GC that it will be “trivial” to allow GCs to see how a given lawyer or law firm is doing ratings-wise in real time. This uber-geek thinks that some corporate legal departments will start locking in AFA deals at the end of a quarter, when some law firms are desperate for work to fill increasingly empty pipelines.

In related news, sources tell the Wired GC that Thomson Reuters and Reed Elsevier are already in a bidding war with the developers of clickESQ. Stay tuned…