Last week, we looked at the changes Netflix was making to its pricing plans and what it might tell lawyers about the environment for legal pricing.

Yesterday, Netflix announced higher earnings after the close, but a lowered guidance for the next quarter lead predictably to NFLX getting pounded in after-hours trading. The primary reason for the lowered earnings estimate: the transition to higher-cost plans for some subscribers.

But I don’t need to look at CNBC today for more insight; I received it for free from two of my favorite Baristas at Starbucks this morning. During a lull in the commuter crush, they were talking about Netflix. Both had cancelled their service in the last week after the looming price increase was announced. One was using Redbox, the automated DVD rental that’s in many larger grocery stores. Using a focused analysis Wall Street should emulate, the appeal of Redbox over Netflix was conveyed in three words:

Then they other Barista chimed in, noting that the day after he cancelled Netflix, he downgraded his cable service to the basic level:

“Most of the shows I watch are free on the Internet anyway. I’ll probably drop my cable TV service entirely next month.”

So Comcast can thank Netflix for getting a customer to look at the monthly credit card bill really closely. And Redbox can thank them both, because a $1 per anything service looks awfully tempting in a slow economy.

What I was about to say to my Baristas was this:

“Hell, if I drop my Venti half-caff I can save $50 per month. That would pay for my cable Internet service.”

But I didn’t. Where, after all, would I get such material?

Sometimes when lawyers talk about legal pricing and the benefits of using a lawyer at $500 per hour instead of one charging $750, we can forget how much money we are talking about on just a daily basis, let alone when aggregated monthly.

There is so much money sloshing around corporate legal services it’s almost criminal. When someone figures out a Redbox approach for the law, maybe my Baristas will comment on that, too.

Perhaps one of them might even be a recent law school grad. 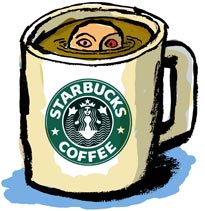