CEOs come and go, but this turn of events is notable because of the lack of a compliance cloud, such as allegations of options backdating. (That issue was examined by Home Depot, but the time period of concern pre-dated Mr. Nardelli’s tenure.)

But Mr. Nardelli had come under scrutiny in governance circles, such as in this op-ed piece in Directorship that talked of the need for Mr. Nardelli to consider a pay cut:

The background is that Nardelli was under pressure from unions and other activist shareholders over his $200 million-plus pay package at a time when the company’s stock had not performed well. Sensing the imminent attack at the annual shareholder meeting, Nardelli discouraged other directors from attending, and they did not come. He ran roughshod over activists in a tightly controlled meeting, and the rest, as they say, is history.

Some of the pressure on Mr. Nardelli was exerted by Relational Investors, which holds 13 million HD shares and sought to meet with Mr. Nardelli. That request was refused. Relational then communicated a desire to have a special committee of the board established to examine the strategic direction of the company.

Somehow when I think of “activist shareholders,” I think of one of the first, Evelyn Y. Davis: 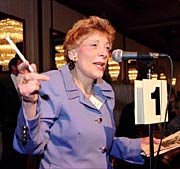 That may be easier for board members to ignore. However, when an “activist shareholder” has 13 million shares rather than 13, it’s probably time to listen.

Update: The WSJ Law Blog notes that new CEO Frank Blake is a highly-credentialed lawyer. (But please Mr. Lattman, giving Mr. Blake the dog-tag in the headline is beneath you.) And also good coverage by the NY Times; as well as an interview with Mr. Nardelli where he talked about the ill-fated 2006 shareholders meeting (apparently less than an hour).