Congratulations to Deval Patrick this morning. He was elected governor of Massachusetts by a resounding 56% of the vote.

Mr. Patrick is a former GC of Coca-Cola, and was also the Assistant AG for Civil Rights under President Clinton. He began the race to the statehouse early last year, facing long odds and a much better known opponent (the Lt. Governor). His impressive bio is here.

You see in common how broken our civic life and how fractured our communities are. You see in common that the poor are in terrible shape and the middle class are one month away from being poor. And you know that government by gimmick and sound bite isnâ€™t working. You know that we deserve better and we are better than that. And for a chance at a better and more hopeful future, you built bridges some of you never thought could be built across all kinds of differences — and then you crossed them. 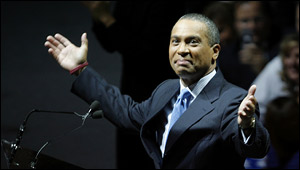