Informed sources tell The Wired GC that associates from major New York and LA law firms have been secretly meeting over the last few months. The purpose of the early-morning Starbucks meetings from baristas-in-the-know: to form a union to get long-overdue wage and work rule reforms in place. In addition, worker safety is a major concern as many associates cannot use their thumbs on the weekend due to excessive BlackBerry usage.

When The Wired GC contacted one of the leaders by email, it was met with a curt “no comment.” Followed by: “Do you need a new go-to law firm?”

Your editor then sent this link, noting that some firms have raised starting salaries to $135,000. This angry response ensued:

Do you have any idea what it costs to roll in the Big Apple? I mean my studio apartment runs $2,900 a month, and my law school futon won’t even fit. And my girlfriend is fond of the Cosmos at Crobar which each set me back a YFS.

“A YFS. What is that?” I asked. “You know, a $20 bill, a Yuppie Food Stamp,” the boisterous young barrister offered.

No word yet on what the managing partners of major firms plan to do if this unionizing campaign starts to take hold. However, one junior partner who was serving lunch at an equity partner meeting tells The Wired GC that he overheard this:

All we have to do is to figure out when they are meeting and then schedule associate training for the same time. During the training, we can go over current events, including outsourcing trends. Maybe we can even serve a salad with Tandoori chicken and see if they can take a hint.

When told of potential sharp practices by the ruling elite, an associate leader known by the handle of “Che” said his people are not fazed in the least. “Outsourcing, eh?” one of them remarked. “Let’s see if they’re still spunky when we start using their BMWs to keep us warm when we are manning the barricades.” 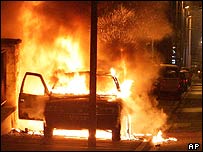