It’s not every day that a mistake on the job can result in life-changing consequences.

TSA in-house lawyer Carla J. Martin is squarely in the news over alleged improper coaching of witnesses in the Zacarias Moussaoui sentencing prosecution. This supposedly occured after Judge Leonie M. Brinkema issued an order last month barring contact with witnesses, essentially sequestering them so their testimony would not be corrupted. In fairness to Ms. Martin, there was also allegedly improper contact by others working on the government’s case.

The witnesses in question were aviation officials who could testify for the government about what they would have done had Mr. Moussaoui told the truth about pre-9/11 planning when he was arrested. Such testimony is considered essential in obtaining the death penalty against Mr. Moussaoui, who earlier pleaded guilty to government charges.

Ms. Martin, and her lawyer, have declined comment. Ms. Martin’s mother, Jean Martin Lay, didn’t get the memo and spoke to the New York Times:

“She was so devastated,” Ms. Lay said in a telephone interview from her home in Knoxville, Tenn. “She said she just didn’t hear the judge.”

Ms. Lay said her daughter was in the courtroom when Judge Brinkema issued the order on handling witnesses, but was probably concentrating on something else “instead of being mindful.”

Being mindful. That is something essential for every lawyer to do every day.

More on the proceedings from SCOTUSblog; there’s also good audio from NPR. Some think life without parole is a more appropriate punishment anyway.

Ms. Martin was forced to run the press gauntlet in heels as she left the courtroom: 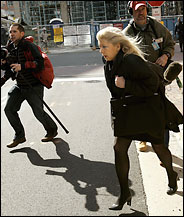